PRATYeK: Every Child for Every Right!

PRATYeK was started in 2013 to promote child-led advocacy all throughout India. PRATYeK in Hindi means ‘everyone’ and it captures the essence of protecting and promoting all rights and opportunities to every child in India by creating a vibrant network of Inclusive Children’s Parliaments across every state of the country. PRATYeK recognises children as primary stakeholders of society and seeks to provide them with local, national and international forums towards effectively engaging with policymakers while ensuring the effective implementation of policies. PRATYeK is also the convening organisation for the NINEISMINE campaign.

The NINEISMINE campaign grew out of Nelson Mandela’s call to ordinary citizens to keep governments accountable to fulfilling the MDGs. Children in India took upon themselves the task to ensure the fulfilment of Goals 2 and 3 and 4 – all of which refer to children. They work to ensure that all sections of India (the children of privileged middle-class and excluded communities) all interact together to find common solutions. The NINEISMINE campaign believes that “Child rights abuses anywhere are a concern for children everywhere”.

At an early age, Aishwarya learned that boys have all the advantages in the society, as she was not getting the same treatment from her parents as her brother was getting. She was not allowed to go to school or play outside and was confined to her home. This inequality was upsetting her so much that one day she cut her hair and dressed up as a boy.

She was brought to PRATYeK by one of her friends, who is a member of the Inclusive Children’s Parliament in Delhi. The team members of PRATYeK discussed with her parents and helped her to address the issues she was facing at home. She was also admitted into a school. Being with other children and the staff of PRATYeK has given her a new attitude to problems. She is a changed person now. She behaves gently, speaks politely and is very hardworking.

She became the Gender Equality Minister of NINEISMINE’s National Children’s Parliament and has effectively advocated at levels ranging from her own home and community through State and National level seeking gender equality and gender education in schools; proper implementation of the ban on child marriage and annulment of all child marriages. She was chosen to represent India at the Day of General Discussion with the United Nations Committee on the Rights of the Child in Geneva. The Topic for discussion was 'Children as Defenders of Human Rights'. She currently is an intern at PRATYeK and trains children in Circus Art, Child Rights and to be Defenders of Human Rights.

Thanks to support from Misean Cara and private donors, the work of PRATYeK continues with an ultimate goal of facilitating 100 vibrant Inclusive Children’s Parliaments across India by 2020. 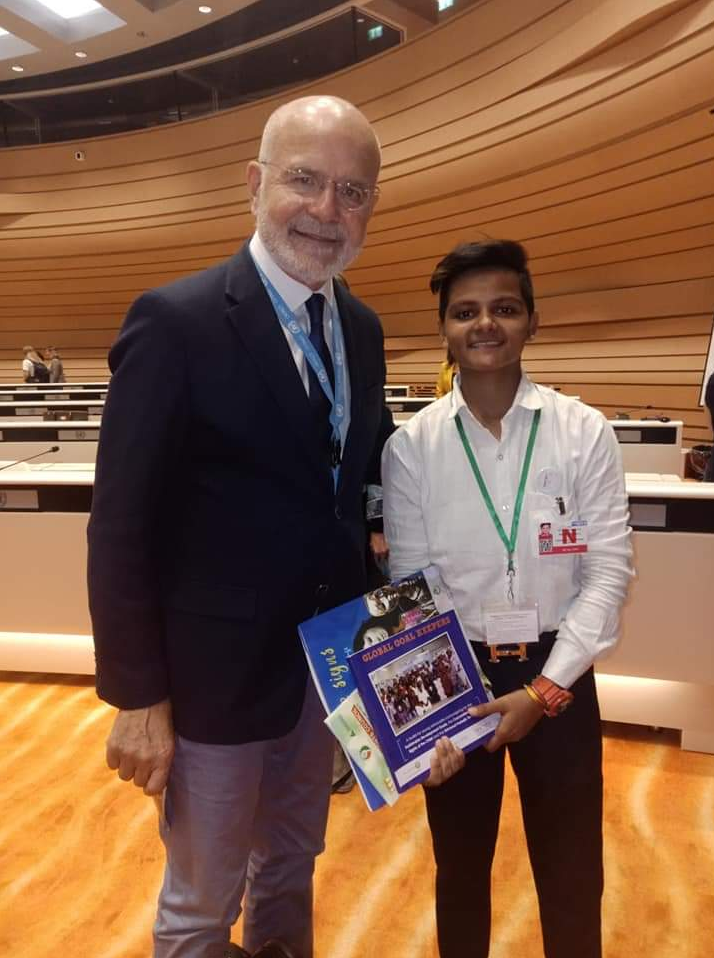 Aishwarya with Michel Forst Special Rapporteur on the situation of Human rights Defenders, OHCHR at the United Nations, Geneva, Switzerland