Over ten years ago in October 2007, 12 pupils and six teachers from Omagh CBS traveled to South America as part of the Christian Brothers Immersion Project. They traveled to the remote Bolivian city of Cochabamba, where they witnessed first-hand the harrowing existence of street children and the daily struggles of living in a developing country. This experience had a lasting impact on the students and teachers and they were determined to ensure that the people of Cochabamba wouldn’t be forgotten by the school community.

To mark the ten year anniversary, the school held a series of fundraising events. The first of these was a non-uniform day which raised over £1,300 for the Centro Hermano Manolo in Cochabamba, which is a front line response to disadvantaged and marginalised youth in this central Bolivian city of over one million people. A team of qualified teachers, psychologists, social workers and various volunteers from the community work at the Centro Hermano Manolo where there is a drop-in centre for the kids open throughout the day. Edmund Rice Mission’s commitment to advocacy and social justice in the region has been a key factor in developing relationships in the community. On Friday 24th November, the school also held a special assembly for all current Year 13 and 14 students featuring two past pupils recounting their Bolivian experience to current students. Noel O’Kane who is now a solicitor in Belfast and Patrick Bogues who is an investment banker for Goldman Sachs in New York returned to the school and captivated more than 200 students by their heartfelt accounts of witnessing the reality of life in Cochabamba. Omagh CBS was also delighted to welcome Br. John Casey who was the school liaison during the visit to Cochbamba. Now based in Rome, Br. Casey traveled to Omagh to share his memories and deliver a message of life to the audience. Past pupils who couldn’t make it back to Omagh sent video messages and the teachers who had visited Bolivia gave their accounts and memories. All speakers highlighted the impact that Edmund Rice Mission has on the communities they serve and the role the students have in continuing the legacy of Edmund Rice to help others when the opportunity arises.

On Saturday 25th November, the school held a very special charity GAA match to add to their fundraising campaign. The Clash of Giants featured members of the 2007 Hogan Cup winning team playing against the 2005 Macrory Cup team. The match was held on a cold afternoon in Drumragh GAA grounds in Clanbogan. The school was delighted to fundraise over £600 at the gates. The fundraising weekend raised over £2,114 for the Centro Hermano Manolo in Cochabamba, Bolivia.

We would like to thank Omagh CBS for their generous support of Edmund Rice Mission. 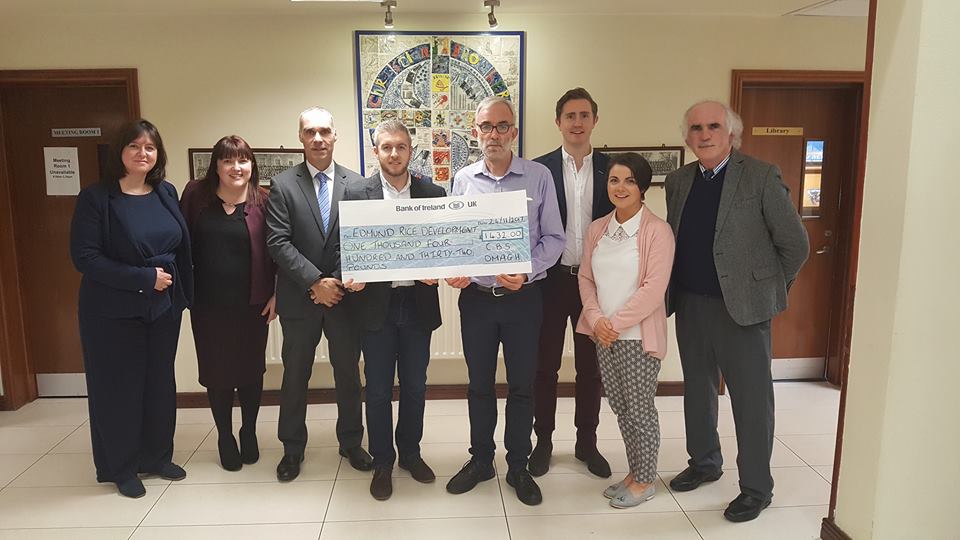